Two Years After Hurricane Harvey, One Group Says It Has Been Overlooked: Renters

Renters affected by Hurricane Harvey in Texas are criticizing the recovery effort, saying that state and federal officials cut them out of $5 billion in aid and focused instead on homeowners.

“The suit accuses officials with the federal Department of Housing and Urban Development and the state General Land Office of ignoring the needs of renters in the Harvey recovery, and of steering the $5 billion in recovery programs to homeowners, developers and landlords.”

Recent investigative reporting by ProPublica reveals that Facebook continues to allow discriminatory housing ads—long after the practice was exposed—and after Facebook executives vowed to correct those clear violation of the Fair Housing Act.

ProPublica is an independent, nonprofit newsroom that produces investigative journalism with moral force.

An excerpt of the article follows:

“Last week, ProPublica bought dozens of rental housing ads on Facebook, but asked that they not be shown to certain categories of users, such as African Americans, mothers of high school kids, people interested in wheelchair ramps, Jews, expats from Argentina and Spanish speakers.

All of these groups are protected under the federal Fair Housing Act, which makes it illegal to publish any advertisement “with respect to the sale or rental of a dwelling that indicates any preference, limitation, or discrimination based on race, color, religion, sex, handicap, familial status, or national origin.” Violators can face tens of thousands of dollars in fines.

Every single ad was approved within minutes.”

And for those looking for an ADA-compliant, multilingual rental listing and locator option, see www.housingidaho.com

This section is provided as a courtesy to those seeking information on past cases filed and/or settled in Idaho. The list will be updated as cases are provided; the information below was provided by the Intermountain Fair  Housing Council as context for the 2016 Assessment of Fair Housing. Cases are organized by the protected class issues at the heart of the complaint.

END_OF_DOCUMENT_TOKEN_TO_BE_REPLACED

Boise, ID April 5th and 6th (see below for additional dates and locations)

Featuring Idaho’s U.S. Attorney Wendy Olson and HUD’s Kristina Miller among others, the workshop will focus on the Fair Housing Act, Support Animals and Reasonable Accommodations, Addressing Hate Acts Under Federal Law and Fair Housing Compliance from a Housing Provider Attorney Perspective.  The event is offered as either an on-site training at Boise City Hall or via webcast at the same time, registration links for both options are below.  It will run from 8:00 AM to 4:15 PM Mountain. 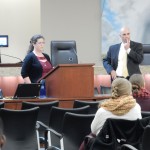 Please contact us for any reasonable accommodation needed for the event.

Please contact us for any reasonable accommodation needed for the event.